Sam would like people to think he is a tough guy, loner type. He will try to run away when you pet him. Don't be fooled. Once in your arms, he will purr and cuddle! However, he does like to scout around and investigate (empty boxes are a favorite and he enjoys surprising his foster sisters!) He enjoys hanging around with our other fosters and playing with them, especially our foster, John who will also be at the event. Sam has "wicked ninja skills" when it comes to attacking the feathered stick and is also a bit rude as he doesn't care which of his foster siblings he needs to pounce on to get those feathers! He is a funny, sweet kitty. He gets along well with our dog, but while they don't play together, he will go out of his way to nuzzle his face against hers and say hello.

Scan here to view Sam's page on our website: 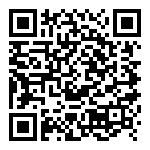